Manufacturing in Indonesia: 3 Things You Need to Consider

Have you been looking at potential manufacturers in Indonesia to either replace or supplement your China manufacturing? Is it something that you’ve thought about?

Since the U.S.-China trade war began in 2018 many importers have been transitioning production from China to other countries in Asia.

With the supply chain disruptions caused by the coronavirus outbreak in 2020, many are now even more interested in doing so.

Indonesia is the fourth most populous country in the world—after China, India, and the United States.

With such a large labor pool, you may be wondering how it compares to other Southeast Asian alternatives like Vietnam, Thailand, or Malaysia.

Today we’ll talk about three key areas you need to consider when evaluating a new manufacturing hub—namely, its export categories, its infrastructure & transportation, and its labor force.

So let’s start by examining the types of products Indonesia is making and shipping out to the rest of the world.

It’s worth noting that the Indonesian government has ambitious plans to push the country into the world’s top 10 economies by 2030—currently, it sits at number 16. 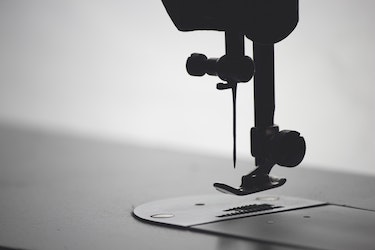 Manufacturing is expected to play a big role in making that happen, and the country has a roadmap called “Making Indonesia 4.0” which will see it developing and investing in 5 main industries:

If the government can successfully nurture these categories, they may be able to attract more importers to the island of Java, where around 60 percent of the country’s population currently lives and works.

Keep in mind that once you’ve written your purchase order for Indonesian-made products and the factory produces them, your containers have a long way to travel before they get to you.

So how does Indonesia’s infrastructure compare to China and other Southeast Asian countries?

According to the World Economic Forum’s 2019 Global Competitiveness Report, Indonesia is ranked number 72 out of 141 countries for infrastructure—which makes them almost exactly average.

With the relative lack of infrastructure, you can expect that you may sometimes have difficulties in getting things to port. 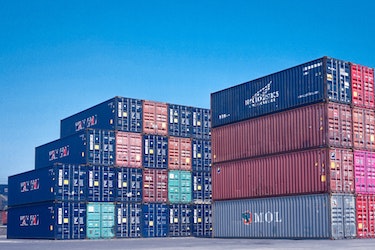 Containers at the port in Semarang City, Central Java, Indonesia

The government does seem to be taking infrastructure development seriously, though. President Joko Widodo is often referred to as the “infrastructure president” by local media and has overseen the development of many new projects.

Over the next five years, the Indonesian government is planning on $430 billion worth of infrastructure investment—$159 billion of that money is expected to come from the government, $90 million from state-owned companies, and $180 billion from the private sector.

Some have even criticized the government for its obsessive focus on infrastructure, while not focusing enough on making it easier to do business in the country.

According to The World Bank’s Ease of Doing Business report, Indonesia is ranked at number 73 in the world. China sits at number 31, while Vietnam, Thailand, and Malaysia sit at 70, 21, and 12 respectively.

So if you are able to do business in the country and find a manufacturer to work with, you now need to be concerned about who is actually going to do the work.

Indonesia’s labor force is large, due to its population of over 267 million and its 69.32% participation rate.

Like other countries in Asia, the country does have rising wages. 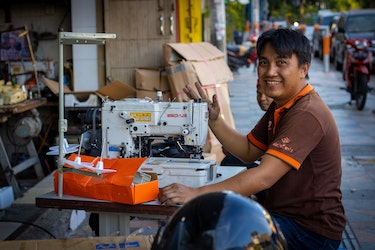 A man hard at work in Surabaya, Indonesia

In 2020, the minimum wage went up 8.5%—it is highest in Jakarta at $298 per month. It is the lowest in Central Java Province—where significant textile manufacturing takes place—at $123 per month.

Overall, this is lower than China’s minimum wages which range from $163 USD to $361 USD per month across the country’s various regions.

According to the Global Competitiveness Report, workers in China have around the same level of skills as their Indonesian counterparts do. But the health of workers is a real concern in Indonesia and their life expectancy is lower.

So with plenty of people to do the work and wages that won’t send you running for the poorhouse, you may be wondering if Indonesia could be the right fit for you.

Will You Find a Good Manufacturer for Your Product in Indonesia?

Indonesia is improving its infrastructure and investing heavily in trying to make its manufacturing sector more attractive. As such, it is positioned to offer good opportunities for the right importers.

Keep in mind, though, that Indonesian manufacturing is less mature than Chinese manufacturing and it may be harder to find the perfect supplier. There also might be new types of language and cultural barriers that you aren’t used to.

That doesn’t mean that you won’t find any good opportunities, just that you need to be realistic about your expectations and not rush the process.

Don’t give up in your search for manufacturers, because you may be able to find a good supplier at the right price, and that will make all the effort worthwhile in the end.

Keep in mind that Indonesia is a bit further away from China than other Southeast Asian nations, which can impact travel time and costs as well as shipping costs. So be sure to take these factors into account.

You should also consider conducting factory audits to help you assess new suppliers so that you don’t end up working with a manufacturer that can’t actually meet your needs.

For more information about the sourcing process, we recommend downloading the following white paper. 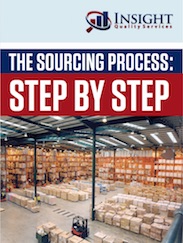 What is product sourcing and what does this process entail? The entire sourcing process – from sourcing agent to shipping – aims at finding, evaluating, and engaging suppliers of products.

In this white paper, we walk you through the process, step by step, to provide a clear picture of sourcing and how all of the pieces fit together to ensure the delivery of quality products to the end user.

What are Your Thoughts?

Do you have any questions about the content of this article? Is there something you would like to add?

Let us know in the comment section below. ⤵️ 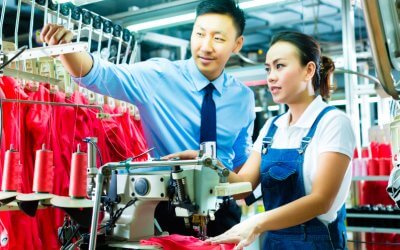 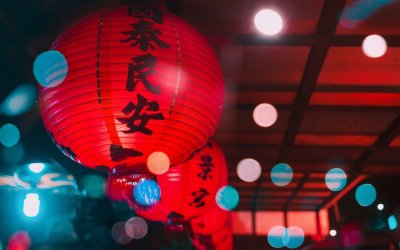 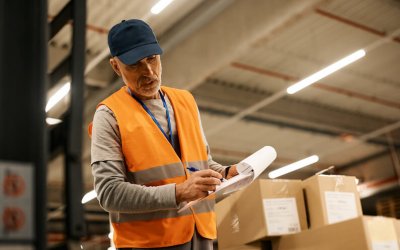